A Skeptic’s Guide to Firewalking

This article first appeared as a Vic Skeptics discussion pamphlet.
The full range of our discussion pamphlets can be downloaded here: http://www.skeptics.com.au/resources/educational/ or by clicking on the “Useful Info” link at the top of this page.

Typically, firewalking involves walking with bare feet across a level bed of hot glowing coals, the remnant of a wood fire. On the Pacific Islands, heated stones are substituted for coals.

What are the claims?

Firewalking is often touted as “mind over matter”. Mystical mental powers are supposed to enable a person to block out the pain associated with the intense heat, and to prevent the feet from burning. Participants at “mental powers” workshops often pay hundreds of dollars to be taught these “ancient mental techniques” that allow them to “defy the laws of nature”.

Can YOU do it?

The Australian Skeptics recommend that you do not attempt firewalking yourself. Although a properly set-up firewalk should be safe, some Australian motivational workshop’s firewalks have gone horribly wrong. The organisers put too much reliance in mystical mental powers rather than understanding the physics involved in preparing the bed of coals correctly, and also failed to understand the necessity of keeping the contact between feet and coals brief.

That said, although walking across hot coals sounds crazy, any fit person can do it. No special mind techniques are required (apart from the courage to take the first step). Although the coals are very hot – (400 to 800ºC), the important thing is how quickly heat energy is transferred to the feet while they are touching the coals. The following photos were taken during a Firewalk which the Australian Skeptics conducted for ABCTV. 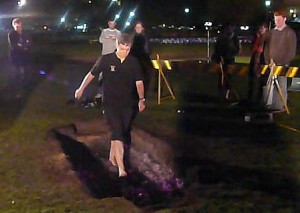 Why don’t your feet get burned?

Before something can burn it must absorb sufficient heat energy to raise it to its burning temperature. The rate at which heat energy is absorbed depends on:

1. the temperature difference between hot (coals) and cold (feet).

2. the amount of heat energy present in the heat source;

3. how quickly heat is conducted through the heat source.

If you have a heat source that does not hold much heat energy and is a poor conductor of heat you can touch it without getting burnt even if it is very hot. A good example is a cake baking in an oven in a metal dish. While both cake and dish are at the same temperature, you can briefly touch the cake, but the metal dish will burn you. Red-hot Charcoal can also be touched briefly. Because it is porous, it does not hold much heat energy. It is also a poor conductor of heat, so when a hot coal is touched quickly, only the surface heat is transferred to the skin. Most of the heat remains inside the coals.

When a person walks across hot coals, their feet are in contact with the coals for less than a second. Hence, they can safely take several steps across a bed of hot coals.

http://skepdic.com/firewalk.html [Discusses the use of firewalking as a motivator.]

This entry was posted on Sunday, September 26th, 2010 at 10:01 am and is filed under Skeptical Article, Skeptical Article - vic skeptics. You can follow any responses to this entry through the RSS 2.0 feed. You can skip to the end and leave a response. Pinging is currently not allowed.

8 Responses to A Skeptic’s Guide to Firewalking