A Skeptics Guide to Homeopathy

Homeopathy Week is upon us! To celebrate, here is our view on Homeopathy. (This and many other discussion topics can be found at our  “Useful Info” link).

Homeopathy is an “alternative medicine” invented in the early 19th century by German doctor Samuel Hahnemann. Despite numerous experiments showing homeopathy to have no effect, it has become a multi-million dollar international industry with its own special rules in advertising law.

In the 19th century, homeopathy was seen as a welcome alternative to dangerous medical practices of the time such as blistering, purges, leeches, and blood-letting. Although homeopathy has declined with advances in mainstream medicine, many people are nervous about the complex array of medicines that they do not understand, and which may have adverse side-effects. To them, homeopathy sounds great. Homeopathic remedies are advertised as safe. They have no side-effects, you can’t overdose, they are non habit-forming, and have no “use by” date. Why?

Homeopathic preparations contain no medicine. Some people feel better when they take homeopathic potions or pills. Some people don’t. In the modern world it’s easy to think that every time we are sick we should take medicines to make us better, (despite the fact that conditions like colds, ‘flu and hangovers run their course and go away without medical intervention). Maybe homeopathic potions don’t work, but some people just feel the need to take something so that they can feel confident and in control. This well-known phenomenon is known as the “placebo” or “sugar pill” effect.

“Homeopathic Dilution” – If you take a mixture and keep adding water, the mixture will get progressively weaker. Any effect the mixture has would be expected to decrease. Homeopaths, on the other hand, claim that if you shake or tap the container a certain number of times after each dilution, the healing effect of the mixture will in fact increase. Claiming the potions are getting stronger, homeopaths usually dilute them to such a degree that you’d need to drink more than an ocean’s worth to be sure of getting just one molecule of the active ingredient. A bottle of pills or potion will contain only the diluting substance (usually water, alcohol or lactose), and none of the healing substance.

One typical homeopathic medication, the  ‘flu remedy, Oscillococcinum, starts with duck’s liver. The liver mixture is diluted to the ratio of one part in 10400. At that rate, one duck is easily enough to make enough anti-‘flu “medicine” to satisfy the world’s population many times over; in fact it’s so dilute that if you were to prepare the product with only one molecule of the duck liver, it would produce more than enough ‘flu potion to fill the known universe. This product reaps $20 million each year. (The unlucky duck has been dubbed “The Twenty Million Dollar Duck.”) The manufacturers don’t show the quantities of ingredients on packets of homeopathic products; they show dilutions in a special code. This is because the high dilutions ensure the product will actually contain no active ingredients! The duck liver dilution in Oscillococcinum is written as 200C. This means the mixture has undergone a sequence of two hundred “C” dilutions. Each “C” dilution is a process where a mixture is diluted by 1:100 and then shaken exactly one hundred times. So a 1C mixture is one hundred times weaker than the original; a 2C dilution is ten thousand times weaker, and so on. So the 200C Oscillococcinum preparation has been diluted to 1 part in

Trust us; we are not making this up! Chemically, that’s just pure water.

Note that each dilution must be followed by exactly one hundred shakes performed in exactly the right way. This makes no sense.

Modern homeopaths cannot deny that their potions are too dilute to contain anything but water, and so they have made the claim that water “remembers” their initial ingredients, and behaves in the healing process as if those chemicals were still there. This claim is wishful thinking that has no basis in scientific study.

Does it matter? – Firstly, there are more homeopathic remedies around than you might think. Often they are freely available on pharmacy shelves, and unless you are aware of labelling codes, you may not know that you are paying “top dollar” for seductively packaged sugar pills or water. Secondly, there is the danger that seriously ill people will use homeopathic remedies instead of effective prescription medicine. Although current laws generally allow ineffective potions and pills to be sold in chemists and health food shops around Australia, the authorities in 2002 acted on notification from the Australian Skeptics to ban sales of homeopathic potions that claimed to be 200C (see above) vaccines against the deadly meningococcal disease and hepatitis B.

For more information regarding homeopathy: 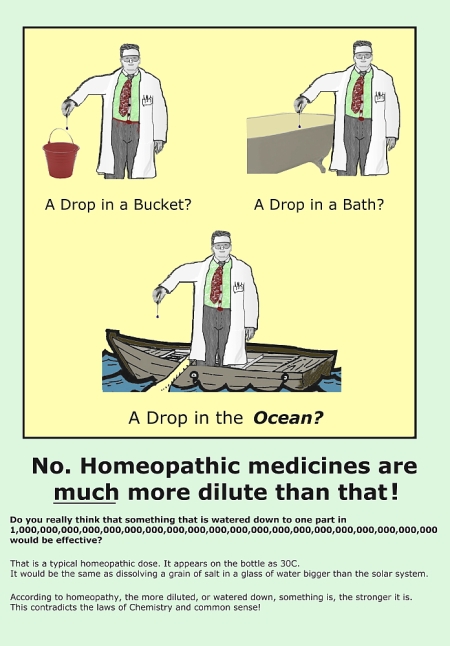 This entry was posted on Saturday, April 10th, 2010 at 9:47 pm and is filed under Skeptical Article - vic skeptics. You can follow any responses to this entry through the RSS 2.0 feed. You can skip to the end and leave a response. Pinging is currently not allowed.

4 Responses to A Skeptics Guide to Homeopathy